In the past, I would normally hold off on a new Visual Studio installation until there is a service pack available, but after reading that Visual Studio 2017 is focused on performance improvements and speed, I decided to install it on an Azure Developer VM to see if I could get the Dynamics 365 Developer toolkit working on it.

Microsoft Developer toolkit for Dynamics 365 / CRM has traditionally lagged behind Visual Studio in terms of releases, but with a few tweaks, it’s possible to get it up and running.

This can be downloaded from here. Save it somewhere locally.

The VSIX is an archive. We need to update a file in there to get it to install. My tool of choice for doing this is 7zip. Right click and extract to a subfolder.

With a text editor, update the extension.vsixmanifest file. The existing VSIX will only work up to Visual Studio 2015 (14.0), so you need to update the references from version 14 to version 15. Once complete as shown below, save the file.

Because the VSIX was compiled by and for VS 2015, you will get a warning when installing, but it should still install successfully. We won’t be able to get rid of this warning, but just click OK, close and Restart Visual Studio. 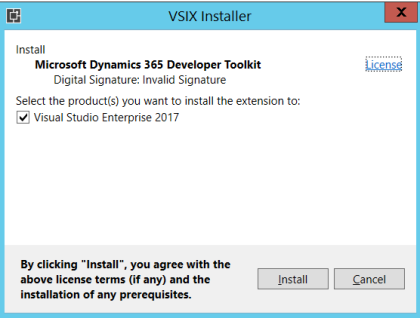 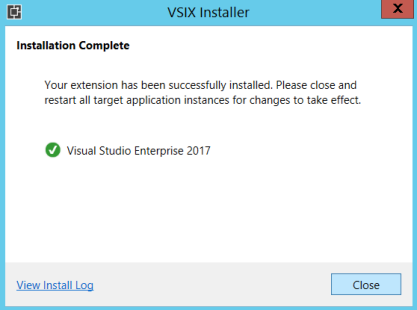 If you haven’t already installed the SDK, download and extract it now. Then go to Tools -> Options -> Dynamics 365 Developer Toolkit -> Tool Paths. Set the paths to point to the plugin registration tool folder and bin folder where you extracted your SDK.

To avoid some connectivity issues with the Developer Toolkit, I found by replacing the embedded SDK dlls which have an older version than those in the current Dynamics 365 SDK it worked fine. You can do this before installing by updating the packed VSIX and reinstalling. Alternatively you can update post-install by looking for and updating the dlls in the folder C:\Users\<user>\AppData\Local\Microsoft\VisualStudio\14.0\Extensions\<pluginid>

As Microsoft appear to be providing updates to this toolkit more frequently than in the past, I would be inclined to only update these DLLs if you run into connectivity problems after installing.

So far so good for me – I have successfully connected to both CRM 2016 and 365 on-premise and online instances.